The first book I read by Sandra Byrd was Mist of Midnight, the first novel in her (incredible!) Daughters of Hampshire series. I was hooked. Now, she has a new series in the works. The first novel, Lady of a Thousand Treasures, will be released on October 9. Sandra was kind enough to answer a few questions about writing, and I’m sharing them with you now in celebration of the new release!

1) What is the inspiration behind the Victorian Ladies series?

It all started with a cow creamer! I first became aware of the mania for collecting, especially among the Victorian and Edwardian British, while watching an episode of Jeeves and Wooster: Jeeves Saves the Cow Creamer. In it, a certain set of men were trying to outdo and outmaneuver one another to acquire and keep a silver cow creamer. Wodehouse played the scenes for absurdity, of course, but in that poking of fun was a truth we all recognize—collecting can become a competitive sport.

Today’s culture reflects the continuing interest in collections, and understanding and appreciating what those who came before us collected. How many of us enjoy watching Antiques Roadshow, for example? We gasp along with the owners when a rugged, torn blanket is valued at tens of thousands of dollars, or a treasure long believed to be a rare work of art is discovered to be a fake.

Collecting was and is both personal and public. Before there were museums, viewing other peoples’ collections was a way to see what they had gathered from their travels, purchased on their own, or inherited from their family.

2) When did you know you wanted to be a writer?

From the time I could read chapter books, which was early at about the age of six.  Reading and writing are two sides of the same coin, as they say, so loving to read led to wanting to write. My first real short “novel” was about a man from the north pole and a woman from the south pole who fell in love but could not marry because of that magnetic repulsion. 😊 Needless to say, it is not in print. But it was a start!

3) Do you type or handwrite your first draft?

I type everything. The story flows from my brain to my fingertips!

4) What is your favorite part of the writing process?

I love research, and I love the actual writing of chapters when it’s going well. I like edits when the critique comes from someone I trust and respect.

5) Is there an aspect of writing you struggle with?

Plotting is hard, fraught-with-anxiety work for me. Without it, though, my books would not work.  So, I do it—teeth clenched—reminding myself that the fun part is coming next!

I, like all writers, struggle with, “Am I good enough? Is this book good enough? Will anyone read this, and does it really matter?” But that’s not limited to writers, methinks!

Normally, I do busy work while drinking coffee until about 10 am, when my brain is fully awake. Then I put my headphones on and dive into the work. I try to take a mid-work walk to stimulate some blood flow to my brain and seat and then get back to work.  When I start summarizing instead of writing actively on scene, it’s time to quit for the day!

7) Are there any authors who have influenced your writing?

Dozens! However, as pertains to this series, Victoria Holt, aka Jean Plaidy, really sparked my love for historical novels, especially those told in first person.

8) What’s the last novel you read and enjoyed?

It’s not the last novel I read, but it’s launching soon, Hidden Among the Stars by Melanie Dobson. I love her work.

9) What’s the last book you read on writing?

I like anything by Michael Hague or KM Weiland, so I revisit their works (and heartily recommend them) often!

Thank you SO much, Sandra, for taking the time to answer my questions! 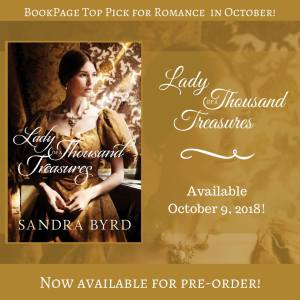 Sandra is hosting a pre-order giveaway, so be sure to check that out. I was lucky enough to receive an advanced copy, so you can expect a review from me soon. In the meantime, you can pre-order your copy from Amazon, Barnes & Noble, ChristianBook.com, or other retailers.

Be sure to visit Sandra online: www.sandrabyrd.com