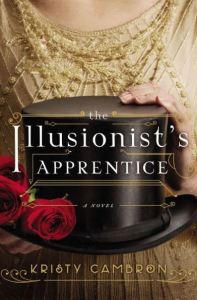 Can a person truly bury the past? Wren Lockhart has spent most of her life trying to do just that. On the vaudeville stages of Boston in the early 1900’s, training under master illusionist Harry Houdini, she has created a new life for herself.

But when the act of one of Houdini’s rivals goes terribly wrong, Wren’s secrets are in danger of being brought to light. FBI Agent Elliot Matthews enlists her help, and though she wants to refuse, he already knows more about her than she is comfortable with, including her real name.

This is the second novel I’ve read by Kristy Cambron, and I enjoyed this one just as much as the first. The characters are intriguing and help to draw you into the world. The story itself is brilliantly unfolded through flashbacks and revelations through the novel.

There is a great balance of suspense and romance, as well as action and quiet. The full scope of humanity, from its lowest to its highest, is on display here as characters exhibit both virtues and flaws.

When you read for hours, yet it feels as if it has only been minutes, you know a book is well-written. That’s what we have here.

Average score of 5 out of 5

I received a complimentary copy of this book from BookLook in return for an honest review.