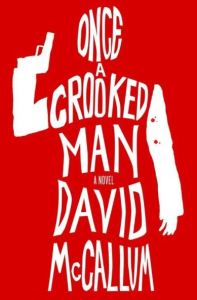 The Bruschetti brothers have proven that crime pay, and pays well. So well, in fact, that they can go legit and hardly lose any money at all. They just have to make some changes and tie up a few lose ends.

When Harry overhears their plans to murder someone in London, he makes the decision to try to warn their victim. The Bruschettis’ plans begin to fall apart, and Harry finds himself in over his head, alone in a foreign country.

David McCallum has been an actor for decades. His most recent and popular role is that of Dr. Donald “Ducky” Mallard on the hit television series NCIS. I know we’re not supposed to confuse people with the characters they play, and I most often don’t, but I think my love of Ducky left me totally unprepared for the level of vulgarity in this novel. There is serious swearing, and completely vulgar/crude discussions and sex scenes. I tried to finish, but had to stop halfway through.

The actual story wasn’t too bad, though I did find myself skimming through passages I didn’t think were adding anything to the story. The characters, again, were okay. Not spectacular, but not flat. I did care about Harry a bit.

When the action picked up it did hold my interest and got the pages turning faster, but it wasn’t enough for me to press on.

I was so excited to read this debut novel from an actor I enjoy so much. I am greatly disappointed to not be able to even finish.

Where to buy the book: Amazon | B&N

Prefer to donate through PayPal?