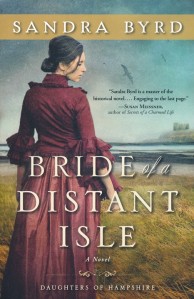 Highcliffe Hall is the family home of Miss Annabel Ashton, the illegitimate daughter of a woman who died in an insane asylum. Her cousin, Edward, has seen to the estate and made sure Annabel has funds to live as a teacher at a school for women. When she comes for what she believes is a short visit, Annabel soon discovers that the family money is nearly gone. To avoid financial ruin, Edward plans to sell Highcliffe, and has promised Annabel in marriage to the vile Mr. Morgan.

But Annabel begins to uncover secrets that could prove she is the true family heir. With Mr. Morgan circling, she finds hope in the arrival of the handsome and charming Captain Dell’Acqua, even as rumors of his true intentions are whispered around her.

Another great novel! I do admit that I have some disappointment that this novel seemed to follow a formula very close to the first novel, Mist of Midnight. That being said, the story is still mysterious and romantic. While I wasn’t suspicious of everyone, I didn’t guess the full truth before it was revealed. I also wished for a little more interaction between Annabel and Dell’Acqua, but what was there was wonderful.

And now I have to nitpick a little. There is an editing/printing mistake in the last half of the book, where Annabel introduces herself as “Ashcroft” instead of Ashton. Because of the scene it occurs in, I thought at first that it may have been intentional, but it goes completely unnoticed by the other characters, so it had to have been an error.

Other than that, the writing is wonderful. The story is engaging and doesn’t let go, even if it is somewhat of a formula.

4 thoughts on “Bride of a Distant Isle by Sandra Byrd”

Prefer to donate through PayPal?