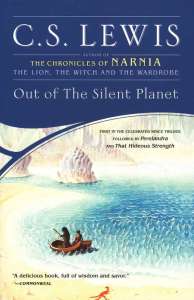 While walking through the English countryside, Dr. Ransom is kidnapped by two men who take him away on a spaceship, to the planet Malacandra. Convinced that the men intend to hand him over to the inhabitants of this strange place, Ransom manages to escape, but finds himself lost and alone. Though not for long.

I’ve had this on my shelf for years, and finally decided to read it. Unfortunately, I was very disappointed. Considering my love of Narnia and some of Lewis’ non-fiction writing, I was expecting to love this. Or, at the very least, enjoy it enough to read the whole trilogy. Neither is the case.

The story is definitely plot-driven instead of character-driven, which loses points for me right away. I love layered characters, whose goals or needs push their story along. Ransom was mostly acted upon by outside forces, which would have been okay had the character (really, all of the characters) not felt so flat.

I’d say that about half of the writing was description of the new planet and its inhabitants. Of course, this is considered necessary because Lewis built this world from scratch, but it really slowed down any action.

I don’t see myself reading the rest of the series, and I probably wouldn’t recommend it to anyone but die-hard sci-fi fans.

I do feel the need to say that there is some Christian symbolism in the story, especially toward the end. I’ve seen some reviews elsewhere that said there is nothing Christian about this book, but that is simply not true. It’s not allegorical in the way that “The Lion, the Witch, and the Wardrobe” is, but the symbolism is there.