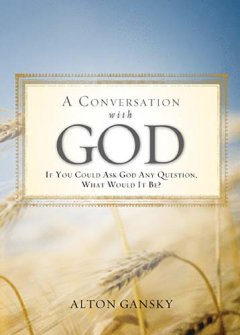 If you could ask God anything, what would it be? This is what author Alton Gansky wants to know. Everyone has at least one thing they would like to question God about.Gansky has put together 55 questions he believes people most commonly have about God and the Christian faith. Using the Bible as his guide, he attempts to answer these questions.

My feelings were mixed as I read this book. For the most part, the theology is good. The “Notes” at the back give you scriptural references that are marked throughout the book so you can read for yourself. There were many sections that I believed would benefit a person who honestly asks these questions, but doesn’t know where in the Bible to look for the answer.

My biggest problems come with the style in which the book is written. The author gives the answers from the point of view of God and other Biblical figures. In this way it seems as if God, Jesus, Moses, etc. are personally answering your questions. To the author’s credit, he states in the introduction that, “no one can speak for God but God.” Unfortunately, at times, it appears he is attempting to speak for God and the other figures. The most troubling instance I found was in the chapter “Why are there two sexes?” In this section, speaking from God’s point of view, Gansky says God’s goal in bringing the animals to Adam was so Adam would feel lonely and ask for a mate, allowing God to make woman. He cites Genesis 2:20 as his source, but neither this nor the surrounding verses state this as God’s intention. So it would seem that Gansky is, in effect, putting words into God’s mouth. This type of thing is done a few times from the points of view of different Biblical figures. There is nothing anti-Christian or necessarily theologically “wrong” in these instances, but it’s unsettling that anyone would attempt to speak as God or Jesus and say things that are not expressly said in the Bible. This book would have been better written from Mr. Gansky’s own point of view. The he could have expressed when he was stating an opinion or theory of his own.

I received this book free from the publisher through the BookSneeze®.com <http://BookSneeze®.com> book review bloggers program. I was not required to write a positive review. The opinions I have expressed are my own. I am disclosing this in accordance with the Federal Trade Commission’s 16 CFR, Part 255 http://www.access.gpo.gov/nara/cfr/waisidx_03/16cfr255_03.html> : “Guides Concerning the Use of Endorsements and Testimonials in Advertising.”